Microsoft is Giving Away Millions of FREE eBooks

Microsoft’s Director of Sales Excellence, Eric Ligman is running the largest ever FREE Microsoft eBook Giveaway.  In his blog post of the 11th July Eric says:

The eBooks are completely FREE ! with no catch and provides a great opportunity to learn some great Microsoft subjects.

These eBooks are available in several formats so you should be able to find something that you are interested in that works with your reader of choice.

I encourage you to pop along to Eric's blog and get hold of as many eBooks as take your fancy.... also you can follow Eric on twitter.

Happy reading.
Posted by furnissathome at 00:34 No comments:

Nutanix - How to Delete an uploaded Image Service File

I have recently started using Nutanix CE in my Home Lab and can say that I am really liking the product.

I currently have a single node running on an Intel NUC (NUC6i3SYH). While this current setup is not that powerful and doesn't provide any failover capability, it does provide a nice cheap way to test and have a good play around with the Nutanix features and functionality.

Recently I have been using the Image Service to upload a few ISO images that I want to be able to mount to my VM's. One issue that I came across was that while part way through an image upload I had a network outage..... this resulted in the image partially uploading and left me with no ability to delete the partial image from within the Prism web interface. 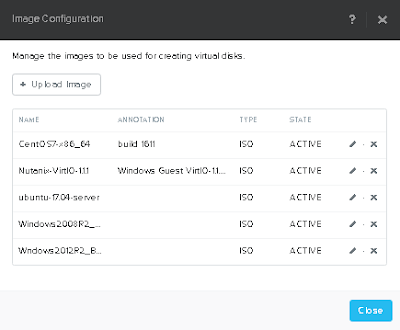 To resolve this issue I made an ssh connection to the CVM, then changed into the Acropolis CLI by typing acli...... to see what images the Image Service knows about type image.list

Checking back in Prism or typing image.list in the acli again will show that the selected image file has now been deleted.

Posted by furnissathome at 14:25 No comments:

I wanted to have Nagios monitor the status of McAfee Virus-Scan on our servers. I wanted to ensure that I knew of any installations where the Agent, Virus-Scan, Engine or DATs were not at a version that they should be.
To that end I decided to write a bit of PowerShell code to use in conjunction with NSClient++ that we use for monitoring our Windows servers.
You can download the PowerShell script from GitHub here:-

Put the downloaded script into your scripts folder in your NSClient++ installation location... e.g.:-

The PowerShell script will check registry keys for McAfee based on the following parameters which need to be supplied:-

If the values of the supplied parameters do not match then a Warning or Critical level will be raised back to Nagios.

To execute from within NSClient++ the following should be in the NSClient++.ini file:-

The bold numbers above should be changed to match your requirements.

On the check_nrpe command include the -t 60, since it can take longer than the standard 10 seconds to run.

Posted by furnissathome at 06:16 No comments:

As mentioned previously on my blog post Nutanix Certification - My next steps, I have started down my next IT certification path with the Nutanix Platform Professional (NPP).

My training for this will involve getting hands-on with both Nutanix CE in my home lab and our Nutanix Cluster at work, as well as completing online Nutanix training. I have also found that others have also used the Nutanix Bible as well as the nu.school YouTube channel to supplement the training.

The first training course that I have started is the Nutanix ECP Administration (5.0) course. This course is available online for free by creating a my.nutanix.com account and requesting access by email to  education@nutanix.com.

The course consists of five modules which have to be taken in order. Once you complete a module the next one is unlocked. The course also has a consolidation lab as well as the NPP 5.0 exam.

To pass the exam it is recommended to complete the course as well as study the following Nutanix Technical Publications:-


The exam consists of a random set of 50 multiple-choice questions. You are allowed a maximum of two hours to complete the exam and can attempt to pass the exam 3 times. The pass mark is 80 %.

The five modules in the course are:-
The first module is split into two parts, the Nutanix Product Family and Nutanix Enterprise Cloud. The module is in the format of slide shows or short videos with questions to confirm and consolidate your learning.

The Nutanix Product Family section introduces you to Nutanix, the hardware and license management.

Once completed, the next module (Administering the Nutanix Cluster) is then unlocked....

I will post more information about the subsequent modules as and when I complete them.


Posted by furnissathome at 05:02 No comments:

Nutanix Certification - My next steps

I have recently been thinking about what technical certification I should do next. It needs to be something that will enhance my IT career, as well as provide me something new to learn.

At work we are in the process of deploying a Nutanix Hyper-converged platform, so I thought that it would be a good chance for me to gain new skills on this platform as well as looking into any associated certifications that I could look into gaining along the way.

Nutanix has several technical professional certifications that individuals can gain to prove their skills:-

You can find out more about each of these certification as well as the three sales related certifications on the Nutanix website.

In my case I have decided to start with the NPP certification. To get started with this you need to create an account at my.nutanix.com and then email education@nutanix.com to request access to the free online training. This will then get you access to the Nutanix ECP Administration (5.0) course along with many other Nutanix educational resources.

The nice thing about the training and the exam is that Nutanix have made all of this available for free!

I will post more about this as I progress through my training to the exam.

Posted by furnissathome at 06:44 No comments:

Nutanix Prism has a neat Health check dashboard. From here you can find out what errors you have in your environment. 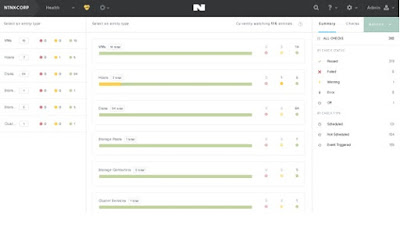 The health checks can be either run individually or you can opt to run all checks. 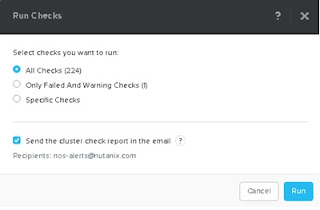 I was trying to upgrade the version of Acropolis to version 5.0.2 and it failed. The reason that the upgrade was failing was due to an inconsistency between each of my Hyper-V hosts. When looking at the Health dashboard I had the “Hyper-V Host pending reboot check” fail.

This issue might occur on Hyper-V hosts that have pending restarts after Windows cluster aware or other updates. In this case, the check returns a FAIL status.

I knew that I had not installed any software or updates to the Hyper-V hosts, and had already checked the disks and controllers.... so I proceeded to do a precautionary reboot of the two hosts after shutting down the associated CVM's.

After the reboot I logged onto the two hosts to confirm that everything was running correctly and that the CVM's had started up. I then ran the individual check again... it again failed.

When you get a Health warning or failure in Prism, you also get a nice link to a Nutanix KB article to help with troubleshooting. In my case it was KB 2713, this article mentions about the disk/controller issue and also that it may be due to a pending reboot. Now we had just rebooted the two hosts so why was it still needing a reboot?

The KB article advises to run the following PowerShell command to identify any files that are pending a file rename operation:-

If any files are pending a rename they will be listed out.... if not you will get an error as the registry key will not exist.

When I ran the command I was surprised to get output listing files that needed to be renamed similar to below...

Reading further into the KB article I found that this is due to printer drivers being installed....and can be caused if you have a GPO that pushes printer out to users on logon.

In my environment this is not the case... so what was installing the printers?

What I found was that my default settings configured in my Remote  Desktop Client had a tick in the box for making local printer resources available in my RDP session. 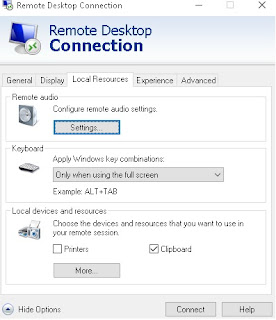 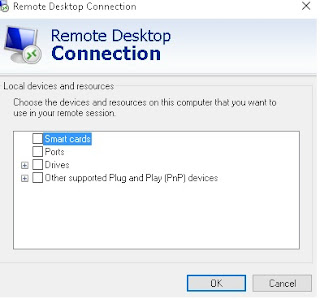 By default the printer and smart card were ticked and every time that I logged onto one of the Hyper-V hosts it was installing the drivers, thus files were pending a rename and the check was failing.

I followed the articles advise and set the "Print Spooler" service to manual, then I also cleared the tick box for resource redirection for local printers in RDP.

Then once more rebooted the affected Hyper-V hosts.

This time the check completed without an issue and I was then able to upgrade to version 5.0.2 of Acroplois.

Posted by furnissathome at 06:20 No comments:

I've recently come across an error when trying to upgrade Nutanix Acropolis from version 5.0.1 to 5.0.2.

The error that was returned within Prism was - "Cluster is currently under-replicated".

This message occurs when the health-state of the Nutanix Cluster is on Level "warning" or "error" or the data resiliency state is not "Ok".

To resolve this issue follow the steps outlined below:-

#1 - Check if you can see under replication from curator command line.

#2 - Find the ID for the last successful curator scan.

#3 - Check which CVM the curator master is running on.

#4 - Log in to CVM that is the curator master and manually trigger a curator scan.

If all is well, you can then try the upgrade again.
Posted by furnissathome at 08:13 1 comment: